Oomi is not your average home automation system. It takes total home control to the next level  by including your security, your sound system and even your home’s general atmosphere. Cool, right? 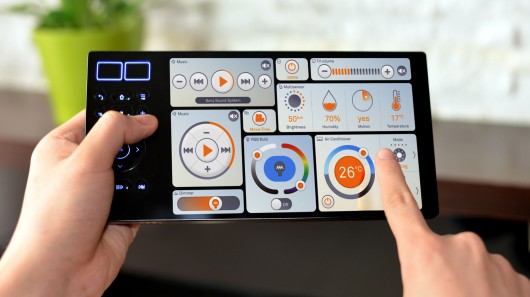 Oomi Home Automation System was initially launched last January. However, it wasn’t fully successful with its first attempt. As such, Oomi decided it needed a relaunch and brought a lot of exciting features to make sure it pushes to the top this time.

Oomi is capable of working well with over 1,200 smart devices through its Z wave mesh networking. To be able to control your smart home, Oomi uses several devices to form a system. This system has a brain and it’s called the Oomi Cube.

One major feature that sets Oomi apart from its competitors is its installation process. While most people find the “Plug-N-Play” method very convenient, Oomi uses a much easier method of installation. This is called the “Tap and Touch” Technology.

Other than the Cube, Oomi also has the following devices to add to your system:

Another good thing about Oomi is that it has additional security features  that cover your own security system. This simply means that Oomi makes your home safer by securing your system. How does that work?

Oomi comes with its own Personal Home Monitoring. You can subscribe to this feature for around $60 on an annual basis. With PHM, you’ll be able to:

You can get the Oomi system at $229. This price includes the Oomi Cube, the Oomi Touch and the  Oomi Plug.