It’s the size of a golf ball that can stick to your ceiling by a sticky tape and a magnet.  Frankly, it looks like an eyeball with its eyelid closed halfway. When you take a closer look, it’s actually a home security camera gone past expectations.

Homeboy is deemed as the world’s first wire free, Wi-Fi security camera. It has no strict contract and no binding policy.

Homeboy watches over your home on a standby mode most of the time. Once it detects movement, it starts to  function in as short as a 500 millisecond time frame. It starts recording shortly after it activates. It can keep a 5 second recording or you can make it 30 seconds, depending on how you want it and how long you want your batteries to last. Homeboy has a free 30 day cloud storage, by the way. It’s where your recordings are sent and stored.

You’ll probably think Homeboy is already interesting by now. However, you haven’t seen the best part yet.

Homeboy also works with  IFTTT. Yes, it’s the programming language you can use to create your own recipe for home automation. The If-This-Then-That program can connect your Homeboy to third party devices and other apps. You can even link it to your social accounts.

If you want a bigger storage, you can you can connect Homeboy with your G Drive or even your Dropbox account. If you want to have your lights turn on when Homeboy records an event, you can link it up with Philips Hue. Actually, the possibility is endless. You just have to get creative with your recipe. You have 169 available channels (and growing) which you can link your Homeboy with. However, if you’re not in the mood, you can simply browse on what others have prepared. Although, that isn’t quite as exciting as making your own.

Homeboy also allows you to monitor your own home since it’s packed with the essentials of a home security system. But, what if you can’t be reached? Homeboy has a special feature that can guard your home like how a professional monitoring system does. However, it needs you to register your close friends and acquaintances. The nearest available person can respond to the notification and verify.

If you find this not enough, Homeboy has a professional monitoring service to cover your security this 2015. It won’t tie you up with any kind of long term contract. Instead, you can only subscribe to their  monitoring plan to fit your vacation length and weekend getaways. It’s a convenient way of making sure your home is safe while you’re away. After you come back, you can switch to relying on your Posse. Convenient, right?

The camera, however, won’t be a good fit if you have pets at home. As they are prone to triggering an alarm, having pets would also initiate Homeboy to start recording events. That won’t be good news for your Homeboy’s batteries. Although they’re rechargeable, you still wouldn’t want to go up and down your ceiling just to get it recharged.

The resolution of the camera, meanwhile, is enough if you only need to monitor your home. However, it can’t help you find the intruders in case face detection is needed. The video resolution, on the same note, was maintained in such way to help conserve your Homeboy’s battery life. Apparently, since Homeboy is offered at $149.00 through their online store, the camera’s features are in greater proportion if you compare it with the price.

If Homeboy doesn’t meet your expectations, it will offer you a 30 day return policy. The device, however, must be as good as new. You will also have to place the device in its original packaging. Also, if for some reason, there’s damage in your device, Homeboy has a one year Repair or Replace policy. It will also shoulder the necessary shipping fee. 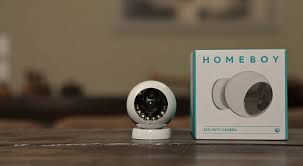