What if you can see who’s hiding in the dark?

With Dropcam HD, you can have 4x digital zoom power and digital panning ability. What’s more interesting is that you can the same features even in the dark with the camera’s night vision capability. Amusing, don’t you think?

However, they have another camera that can better amuse you. Dropcam Pro multiplies Dropcam HD’s resolution camera to even a greater extent.

Setting up Dropcam can only take you a little more than 60 seconds.

Since you can’t pan or tilt the camera physically, you would have to rely on Dropcam’s feature of “pinch to zoom”. You literally need to pinch in against your mobile’s screen to get a clearer view of a room. If that is not enough, you can try using Dropcam’s wand on the app. As if like magic,it works to concentrate light on your target area to give you a clearer shot, like finding your cat hiding under your coffee table in the corner. 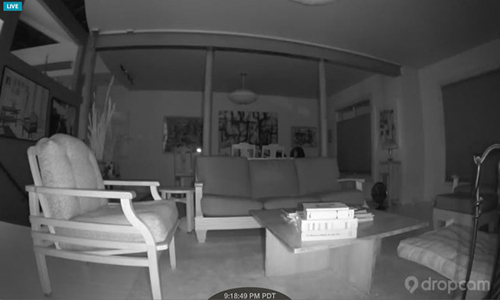 Dropcam utilizes 8 infrared LEDs on its night vision mode. Though it contains a fewer number of LEDs than Dropcam HD, it is still as efficient as it claims to be on dark room monitoring. Dropcam Pro also has a better two way talk feature. The mic sensitivity was increased so you can experience a clearer quality. However, Dropcam Pro doesn’t have a backup power source so you have to make sure it’s constantly plugged in.

Dropcam’s recording is cloud based. You get live video streaming for free. However, if you decide to get rewinds of previous recordings, you may have to pay $9.95 a month. That is good for a seven day recording. If you want to have it for a whole month, you may need to add  an additional $29.95. You can download a recorded video as an MP4 file or you can even make it available for public streaming. Whichever you prefer, Dropcam assures you that all data are secured on a bank-level security.

With Dropcam’s ability to capture events in a higher resolution, it is often used to monitor kids at home. Dropcam is a perfect choice to look after your babies. You can conveniently watch over your kids while you’re going through your other household chores.  How?

However, there are many claims and questions regarding Dropcam Pro’s temperature threshold and overheating issues.  Dropcam explains that the device’s back is specifically designed to act as a heat-sink. If you happen to touch Dropcam and you find it warm touch, don’t panic. The developers claim that it is not uncommon to happen.

Dropcam app provides geofencing capabilities which means you can omit the manual arming and disarming of your system every time you get home. It senses you whenever you arrive or leave. You can also manage your alerts by Location Aware. This feature automatically turns on alerts once you leave the house.

The Dropcam Pro has an 8x digital zooming capacity.

It has a “pinch to zoom” feature on the app. You can also use the Dropcam wand to get a better view.

The camera is trusted as a baby monitoring device as well as for keeping an eye on pets.

Dropcam is prone to overheating, especially on night mode.

It has Bluetooth LE.

Dropcam has dual WiFi and can connect via 2.4 GHz or 5GHz.

You’ll have to pay for Cloud Video Recording.

There is no local video storage.

There is a wider field of view with the wider lens and bigger sensor.